Thirty-two astronauts were assigned to fly in the Apollo lunar landing program. Twenty-four of them, flying on nine different missions, reached an orbit around the Moon. (Of the other crewed missions, Apollo 1 did not launch and Apollo 7 and Apollo 9 were low Earth orbit spacecraft testing missions). In addition, nine astronauts flew Apollo spacecraft in the Apollo Applications Programs Skylab and Apollo–Soyuz Test Project.

Apart from these twenty-four men who visited the Moon, no human being has gone beyond low Earth orbit. They have, therefore, been farther from the Earth than anyone else. The twelve who walked on the Moon are the only people ever to have set foot on an astronomical object other than the Earth.

NASA’s Director of Flight Crew Operations during the Gemini and Apollo programs was Donald K. “Deke” Slayton, one of the original Mercury Seven astronauts, who was medically grounded in September 1962 due to a minor cardiac arrythmia – paroxysmal atrial fibrillation. Slayton was responsible for making all Gemini and Apollo crew assignments. In March 1972, Slayton was restored to flight status, and flew on the 1975 Apollo–Soyuz Test Project mission.

The prime crew members selected for actual missions are here grouped by their NASA astronaut selection groups, and within each group in the order selected for flight. Two versions of the Apollo Command/Service Module (CSM) spacecraft were developed: Block I intended for preliminary low Earth orbit testing, and Block II which was designed for the lunar landing. The Block I crew position titles were Command Pilot, Senior Pilot (second seat), and Pilot (third seat). The corresponding Block II titles were: Commander, Command Module Pilot (second seat), and Lunar Module Pilot (third seat). The second seat pilot was given secondary responsibility for celestial navigation to keep the CSM’s guidance computer accurately calibrated with the spacecraft’s true position, and the third seat pilot served as a flight engineer, monitoring the health of the spacecraft systems.

From the Mercury Seven 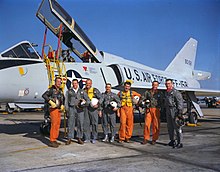 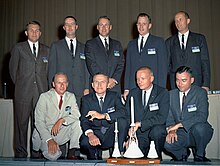 All of these astronauts flew on Gemini, and except for White, each commanded one Gemini and one Apollo mission:

Five of this group got their first spaceflight experience as second seat on Gemini:

The remaining six members of this group were selected for their first space flights on Apollo: 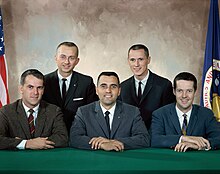 In June 1965, NASA named a group of five scientist astronauts, the first group qualified by doctorate degrees rather than test or military fighter pilot experience.[4] Geologist Harrison H. “Jack” Schmitt participated heavily in the geological training of the lunar landing astronauts, as well as assisting in the analysis of returned samples and the preparation of mission reports. In 1970, he was selected as Lunar Module Pilot for the Apollo 15 backup crew, and prime crew on Apollo 18. When program cutbacks canceled missions 18 through 20, NASA’s lunar geological community insisted on having a geologist on the Moon, so Slayton reassigned Schmitt to Apollo 17.

NASA named a group of 19 more astronauts in April 1966. None had spaceflight experience before their Apollo mission.

Other astronauts who trained for Apollo but did not fly

Apollo astronauts who walked on the Moon

Main article: List of people who have walked on the Moon

Twelve people have walked on the Moon. Four of them are still living as of July 2019. All crewed lunar landings took place between July 1969 and December 1972 as part of the Apollo program. Most astronauts at that time came from the military services and were considered to be on active duty during their NASA service; the few exceptions were considered civilian NASA astronauts (regardless of any prior military service).

Alan Shepard was the oldest person to walk on the Moon, at age 47 years and 80 days. Charlie Duke was the youngest, at age 36 years and 201 days.

Joe Engle had trained on the backup crew for Apollo 14 to explore the Moon with Cernan, but Engle was replaced by Schmitt on the primary crew for Apollo 17. Schmitt had previously been crewed with Apollo 12 Command Module pilot Dick Gordon in anticipation of Apollo 18, but Schmitt replaced Engle on Apollo 17 after the cancellation of Apollo 18 and Apollo 19, leaving Gordon as the last Apollo astronaut to train extensively for lunar exploration without ever landing on the Moon.

Apollo astronauts who flew to the Moon without landing

Besides the 12 people who have walked on the Moon, 12 more have flown to within 0.001 lunar distance of its surface. During each of the six missions with successful lunar landings, one astronaut remained in lunar orbit while the other two landed. In addition, the three-person crews of Apollo 8 and Apollo 10 also entered lunar orbit, and the crew of Apollo 13 looped around the Moon on a free-return trajectory.

All nine crewed missions to the Moon took place as part of the Apollo program over a period of just under four years, from 21 December 1968 to 19 December 1972. The 24 people who have flown to the Moon are the only people who have traveled beyond low Earth orbit. Twelve of them are still living as of July 2019.

Because of Apollo 13’s free-return trajectory, Lovell, Jack Swigert and Fred Haise flew higher above the Moon’s 180° meridian (opposite Earth) than anyone else has flown (254 km/158 mi). Coincidentally, due to the Moon’s distance from Earth at the time, they simultaneously set the present record for humans’ greatest distance from Earth, reaching an altitude of 400,171 km (248,655 mi) above sea level at 0:21 UTC on 15 April 1970.